125 years of ABB in Switzerland.

A brilliant retrospective of the future.

When a globally ultra successful Swiss company celebrates an anniversary, this calls for professional events of the highest international calibre. 2016 was very much an ABB year for standing ovation. We designed, organised and orchestrated an entire spectrum of events for the world-renowned conglomerate, from the “Gottardo” locomotive christening and the Gotthard Base Tunnel opening ceremony to the “125th anniversary gala”.

His name is YuMi and he’s the world’s first collaborative, dual arm, small parts assembly robot. Ushering in a new era of industrial process automation, he works hand in hand with humans. Developed by ABB, YuMi was rolled out in 2015. The robot marks a further milestone in the company’s 125-year innovation story.

Up until the end of the 19th century, tranquil Baden was known for its springs and thermal spas. Then the young engineers Charles E. Brown and Walter Boveri set up the firm BBC in 1891, transforming the small town on the River Limmat into a prosperous hub of mechanical and electrical engineering.

Operating out of Switzerland, the company successfully conquered markets in Europe and throughout the rest of the world.

Operating out of Switzerland, the company successfully conquered markets in Europe and throughout the rest of the world: In 1944, BBC developed the first high-speed locomotive with a direct drive system, and in the early 1970s, the world’s most efficient transformer. Almost one hundred years after BBC was founded, it merged in 1988 with Swedish company ASEA to form ABB, headquartered in Zurich. Today the Group and its subsidiaries are present in over 100 countries and have a workforce of around 135,000 employees.

125 years of innovative, epoch-making achievements out of Switzerland for the entire world. Definitely an anniversary worth celebrating. And in a manner fitting for a conglomerate of ABB’s standing. As event partner to ABB, standing ovation was privileged to work closely with the Group and assist in staging a whole series of standout events to mark this major anniversary under the motto “Serving the World from Switzerland”.

The absolute highlight of the year’s calendar was the two-day gala event “125 Years of ABB” held on 20-21 October 2016 on the fairground in Wettingen (canton Aargau). ABB hosted some 550 guests on each of the evenings. Invitees included key stakeholders and partners from around the globe. ABB’s event specs can be summed up as follows: “To toast 125 years of achievements with pride, satisfaction and joy, to warmly thank customers for their trust, and jointly with them to focus on a successful future.”

Show/Content: Dramatic construction of the ABB journey through time.

This newly toasted transformation process also became the declared principal motif of the gala event story. For standing ovation this meant imbuing the event with a sense of new departures without disregarding the historical relevance that a 125th anniversary naturally also embodies. In other words, the organisation and orchestration of the event and all related communication measures were to be perceived through the lens of a «retrospective of the future”.

Attendees at both gala evenings were treated to a lavish line-up of artistic highlights. The MIAGI Youth Orchestra from South Africa offered a perfect musical rendition of ABB’s long journey through time. Playing various pieces composed especially for ABB, the internationally acclaimed youth orchestra met with a very enthusiastic reception. YuMi performed an impressive routine fusing art and hi-tech. Appearing with a professional dance group, the ABB robot presented a highly entertaining sample of choreographic staging that was both surprising and staggering. The varied programme was rounded off with the world premiere of ETH Zurich’s autonomous micro-helicopter FireFly (choreography design and execution by Verity Studios) as well as a show with guest interaction. 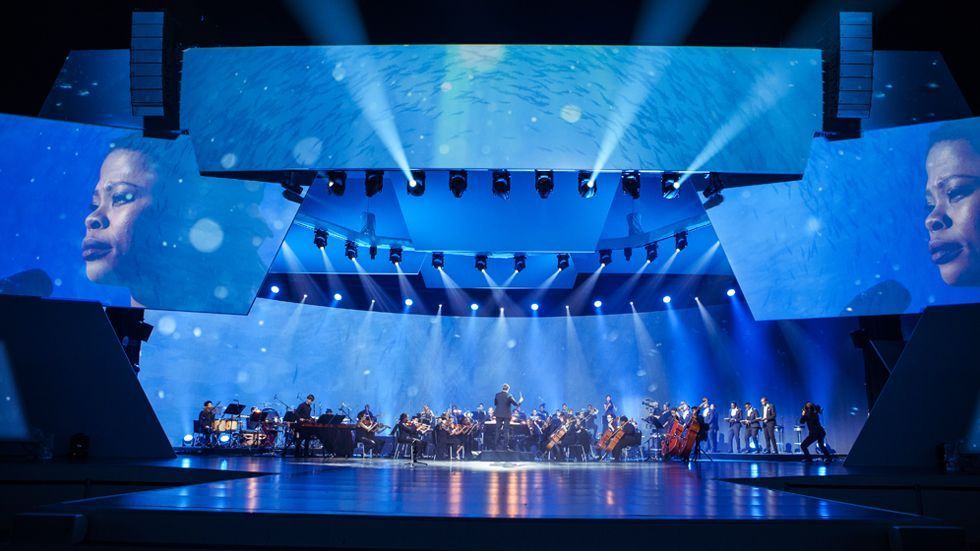 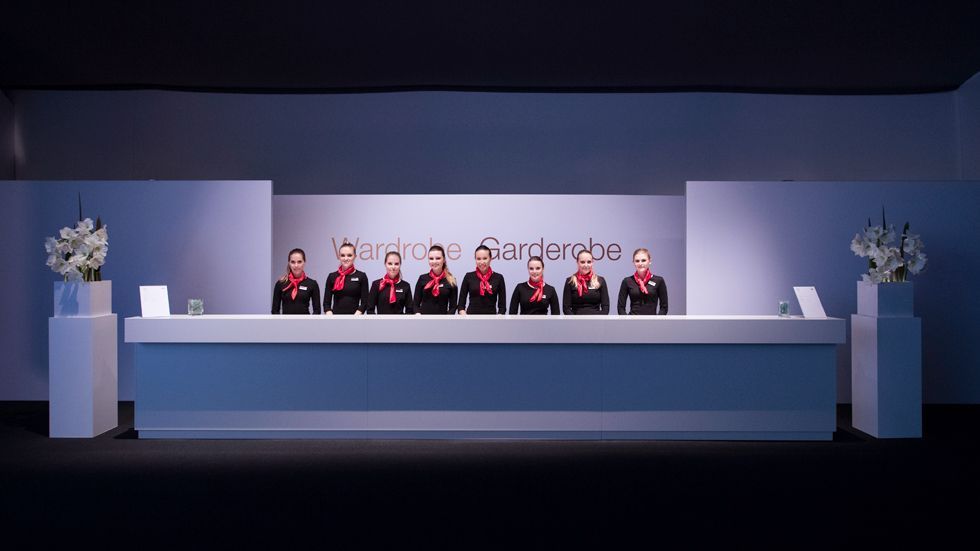 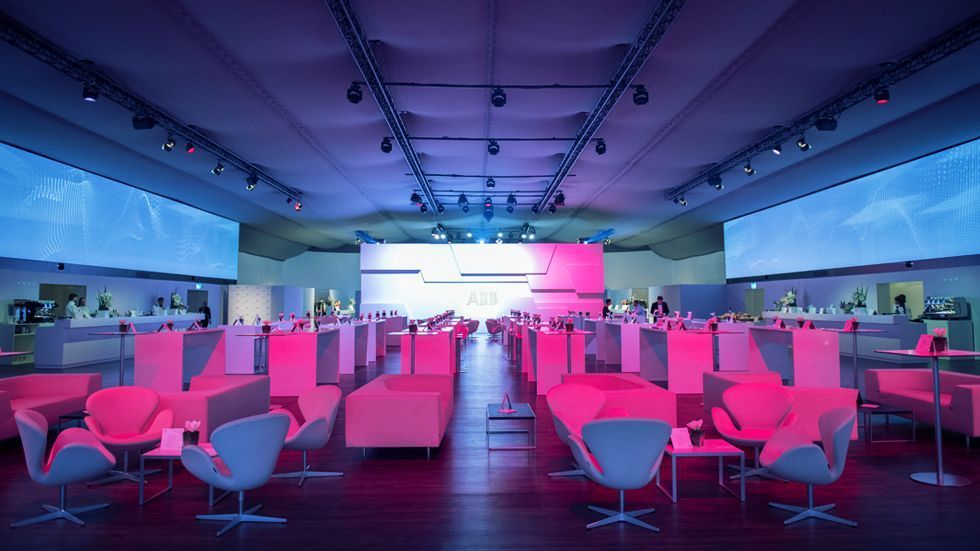 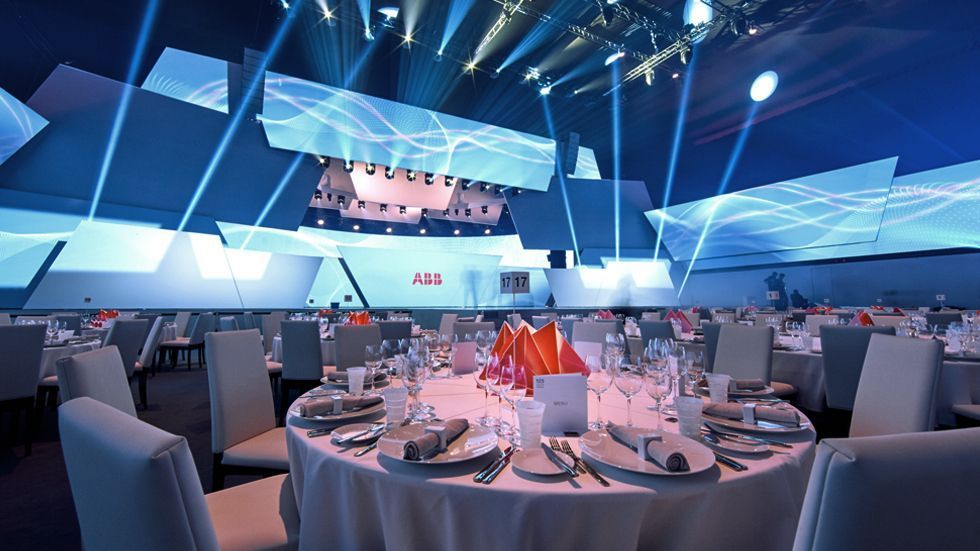 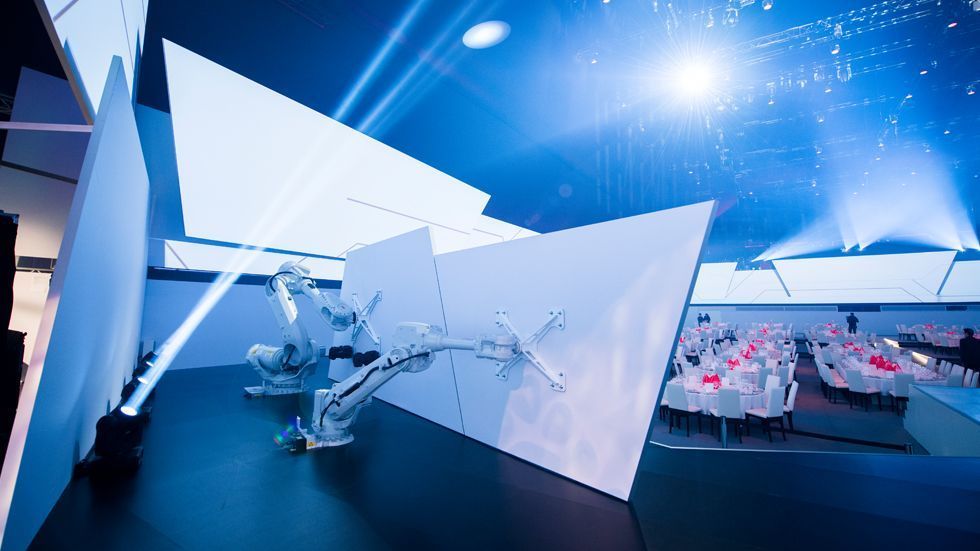 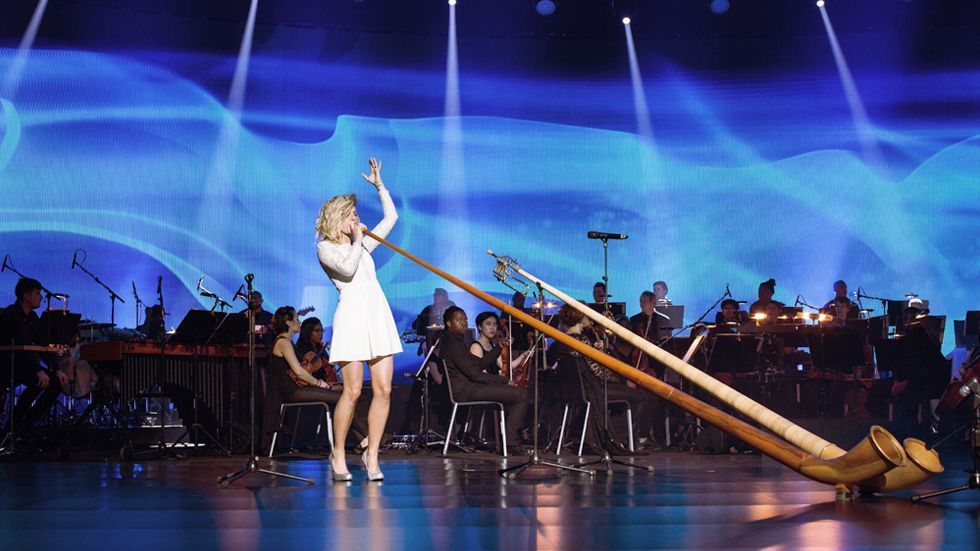 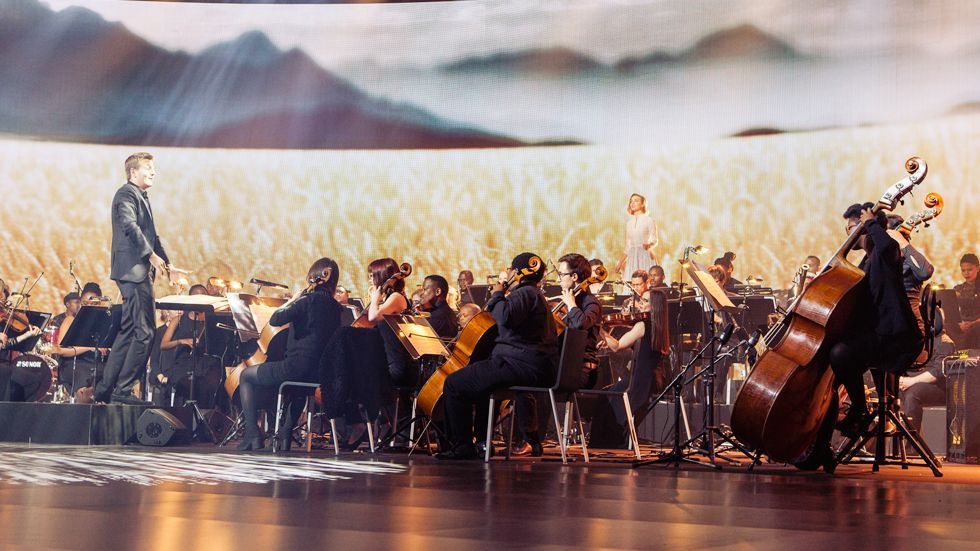 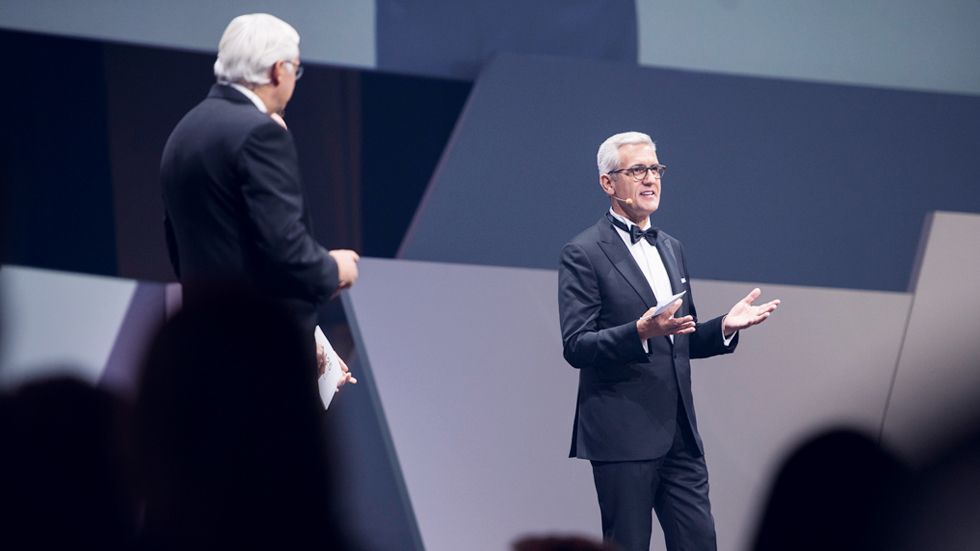 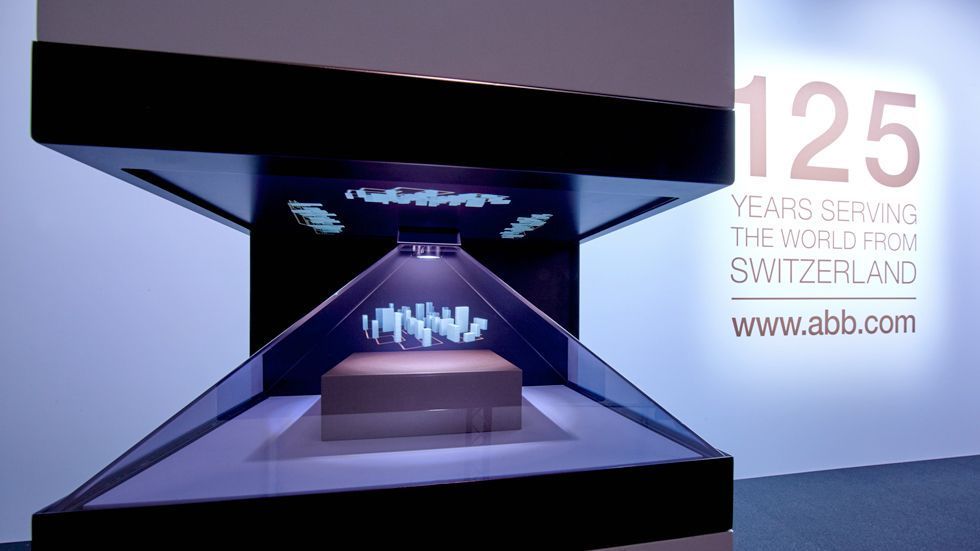 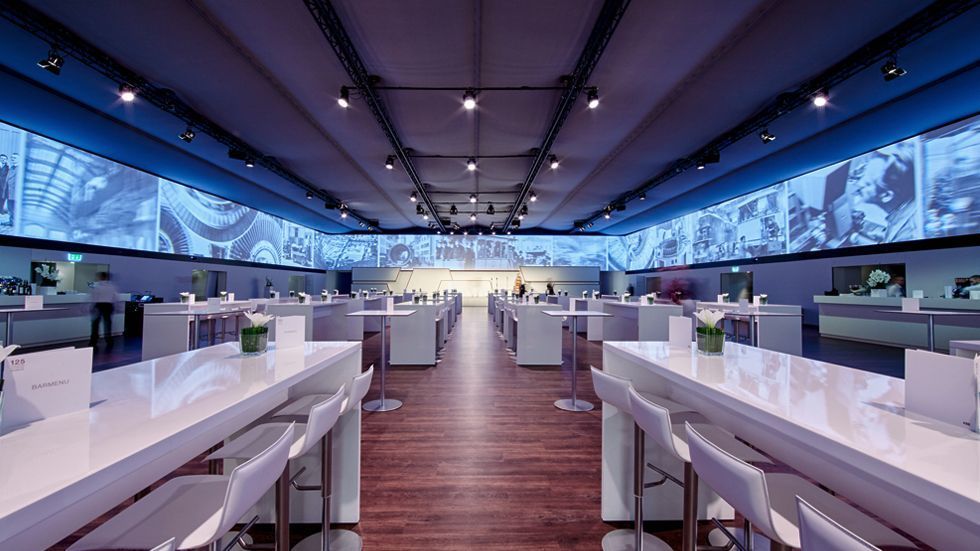 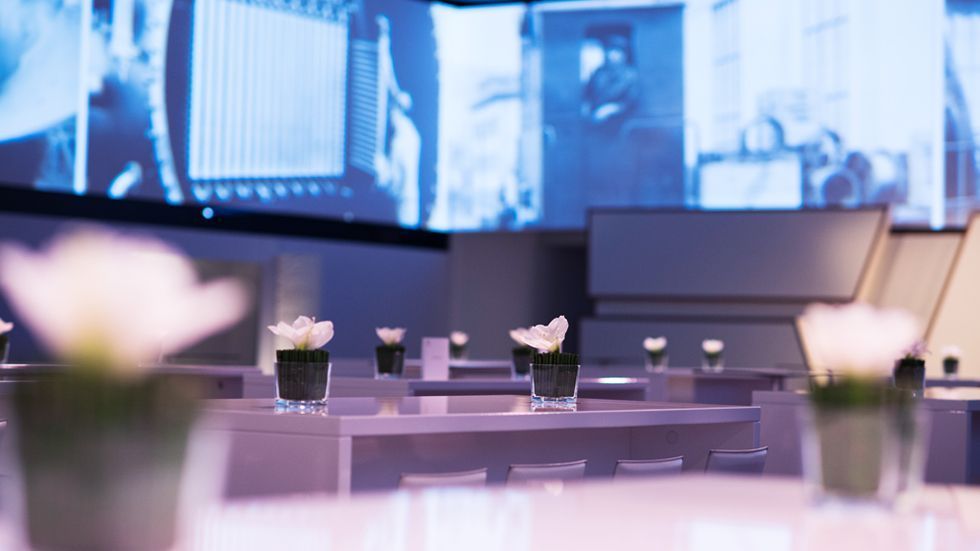 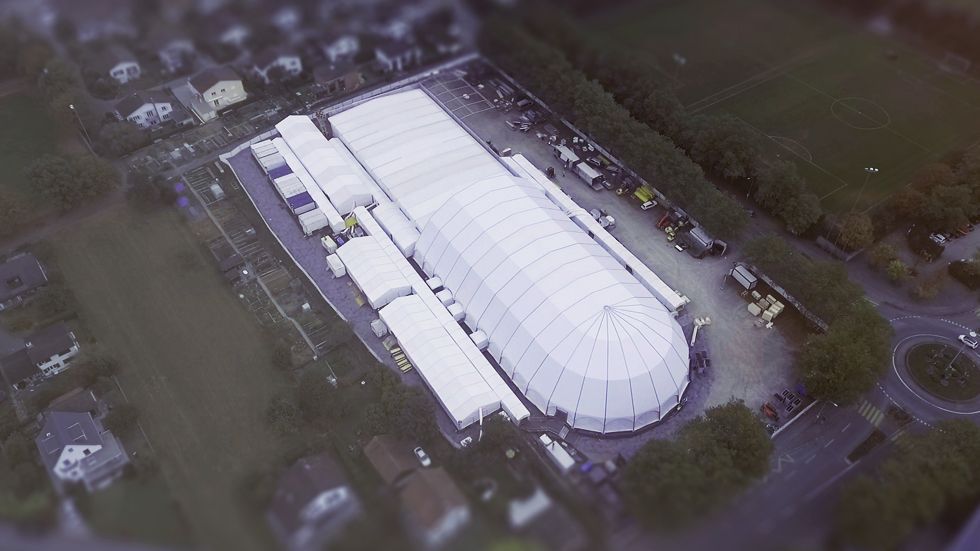 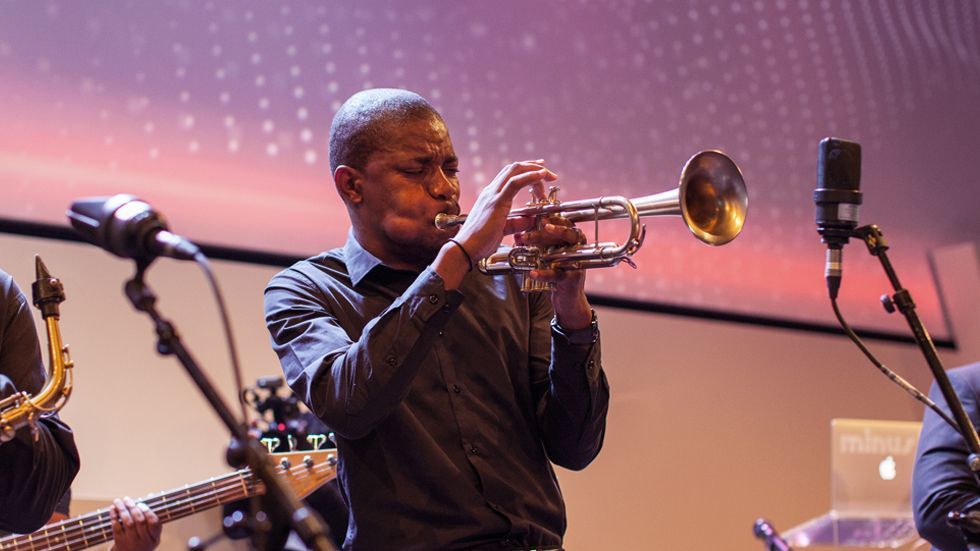 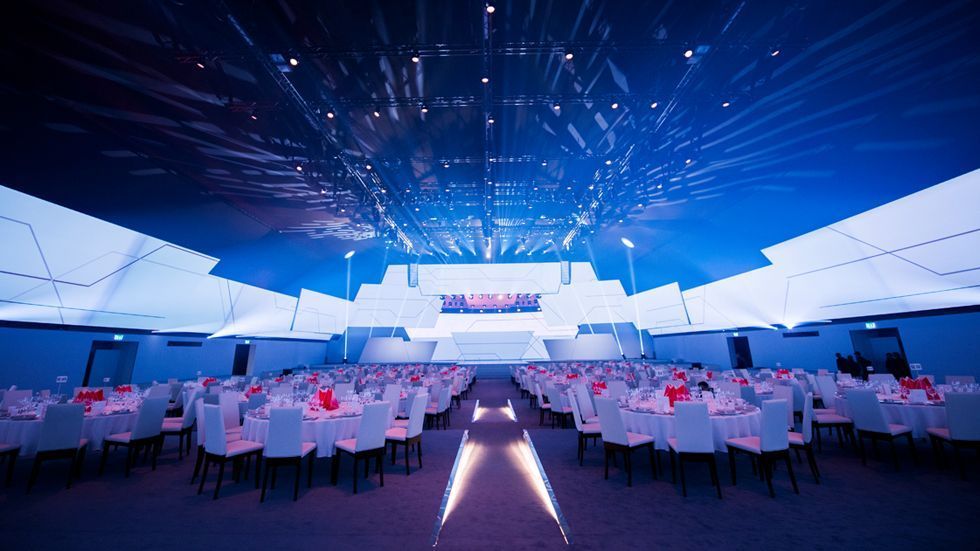 Tasked with convincingly conveying this new spirit at all levels, from 3 October to 7 November 2016 no fewer than 1200 people were working full out under the supervision of standing ovation to ensure that the ABB gala event was a complete success. We assumed the role of general contractor, cooperating with a total of 30 partner companies on this major project.

The event engineering logistics and planning were challenging. 120 articulated trucks were underway to ferry some 1400 tons of material to Wettingen to set up the gala site. 110 kilometres of cable were laid, in part to connect 52 giant projectors with 1050 m2 of projection area and 180 m2 of LED screen area to the electrical grid. The various digital productions at the gala event generated a total of 23 terabytes of video and image data. “This large amount of cutting-edge equipment enabled us to use the event gala to emotively showcase ABB’s avowed intent to be at the vanguard of those shaping the industry-wide digital revolution,” explains Michael Dancsecs.

Hospitality: A continuous guest journey from arrival to departure.

standing ovation’s hospitality concept for the ABB gala event was also orchestrated down to the very last detail. It was conceived as a guest journey which began for the numerous international invitees at the moment they received their invitation. It later took in their arrival at the airport, the hotel check-in and transportation to the gala. This extensive guest journey also included all communication measures (invitation, registration process, writing paper, microsite, maps, give-aways etc.) as well as the event identity at the actual gala evenings.

Given the magnitude of the entire process of designing and staging this mega-event, standing ovation had to provide and deploy substantial resources and an extensive infrastructure. “To ensure that these infrastructures could still serve a use after the gala, we subsequently turned them over to ABB Switzerland to allow them to organise and put on various follow-up events,” points out Michael Dancsecs.

ABB’s 125th anniversary gala events represented a milestone project for standing ovation. This is true of the entire anniversary year celebrated by the Swiss showpiece company. “There is no doubt about it,” says standing ovation owner Michael Dancsecs, “2016 was very much an ABB year for us.” Even months beforehand, standing ovation began planning and designing a wide range of anniversary activities in close collaboration with the ABB event team. The year’s events kicked off with the “Gottardo 2016” locomotive christening on 19 January 2016 to celebrate the entry into service of a modern ABB branded Lok2000 locomotive in French-speaking Switzerland.

Events kicked off with the «Gottardo 2016» locomotive christening.

This was followed by a highly regarded ABB presence at the World Economic Forum (WEF) in Davos at the end of January. Later on the event agenda, the huge Gotthard Base Tunnel opening ceremony was held on 4-5 June. As part of the overall programme, standing ovation organised an ABB event on the SBB site in Rynächt (Uri) and another at the site in Pollegio (Ticino) under the heading “What is ABB’s contribution for Switzerland today and in the future?” Prompted by the immense interest this generated, a mobile ABB pavilion was set up at short notice and presented on an ABB Gottardo Roadshow 2016 in Biasca, Lucerne, Zurich, Lugano and Baden.

Likewise in close collaboration with the ABB event team, in October standing ovation designed and staged ABB Capital Markets Day (also featuring an employee event) as well as the ABB Technology Forum. At this year’s Technology Forum, the first USD 300,000 ABB Research Award in honour of former Chairman Hubertus von Grünberg was presented to a young researcher from Belgium.

An event in a class of its own.


The long and close partnership with standing ovation garnered particular praise from ABB following an eventful year. “We have been extremely fortunate to be able to work with such a competent event partner on shaping what for us is a key anniversary in terms of both operations and communication,” remarks Carmen Feuz, Head of Corporate Events at ABB Asea Brown Boveri Ltd. The 125th anniversary gala event in particular set a veritable benchmark for planning perfection, ambience and professionalism. “That was an event project in a class of its own. Even our robot YuMi could not have done a better job of putting the countless modules together to form a coherent whole.”