The live format is reinventing itself, and is booming.

No country in the world stages more open air festivals than Switzerland. The live format is all the rage – and it is constantly reinventing itself, both commercially and culturally. What are the trends?

Switzerland is the world’s greatest nation of open air festivals. It might not have invented the live festival, but it has embraced it with such fervour that the market now comprises around five million festival-goers. At one end of the spectrum are the big hitters such as Paléo and Frauenfeld with up to 230,000 and 170,000 visitors respectively, and at the other the indie and community festivals that are delighted to sell 2,000 tickets. In between the two extremes is an entire festival landscape that couldn’t be more diverse.

People see a festival as a time-out.

The business models at play are as varied as the programmes and positioning. The precise revenue mix of ticket sales, catering, merchandising and sponsorship depends heavily on the size of, and sponsorship for, the festival. PLCs have different revenue models to associations and ambitious newcomers take a different approach to seasoned veterans that are operating with budgets ranging from CHF 27 million (Paléo) to CHF 8 million (OpenAir St. Gallen).

The live boom is consolidating.

Live festivals are a reaction to the digitalisation of music consumption. Streaming is good, live is better. The numbers seem to corroborate this: 877 live music events took place in Switzerland in 2005; ten years later, that figure had risen to around 1,640, according to the Swiss Music Promoters Association (SMPA press release, 5/2015). However, the pace slowed somewhat in 2015. The SMPA alluded to an increasingly cramped market, with falling attendances at live events. Thomas Kastl, who at that time was the boss of Good News, had already warned that: “The Swiss festival market is oversaturated.”

More than line-ups and headbanging.

If the live market is saturated, it certainly isn’t fatigued. Many live festivals have been evolving over a long period: from a music event to a multi-faceted experience format. “People see a festival as a time-out,” believes Jasper Barendregt, Festival Director at FKP Scorpio, the German producer of the Greenfield Festival in Interlaken. “It’s ultra fashionable to go to a festival.”

The line-up has long ceased to be the sole audience draw. “Music is the key component of a festival, but it is no longer the only one,” says Barendregt. The future is all about the mix, i.e. unique live shows combined with novel themed areas. Ambience, mood, food options and a tie-in with lifestyle themes are therefore becoming increasingly important.

Active in 40 countries and dealing with 550 million spectators a year.

Booking giants are storming the market.


Summer 2017 brought not just hot days, but hot news for Openair Frauenfeld: as of now, US group Live Nation, one of the world’s biggest producers of live events, is the owner of the tradition-steeped, 11-million-strong festival. Anyone who, like Live Nation, operates in 40 countries and deals with 550 million spectators a year has virtually limitless booking power. Live Nation works with such huge names as Madonna, Jay-Z and U2 – on an exclusive basis. Openair Frauenfeld by no means marks the culmination of Live Nation’s ambitions in Switzerland. “We are looking to make more investments in Switzerland,” says André Lieberberg, Managing Director of Live Nation Germany.

The complete festival package is key.

For medium-sized festivals with between 10,000 and 15,000 day visitors, painstaking marketing and well thought-out bookings are more critical than ever. Singer-songwriter event Unplugged Zermatt is a prime example of how a clear profile and programming that is concordant with this are key to a festival’s success. The rough patch experienced by the Zurich Openair demonstrated how difficult this is: buying stars is no guarantee of a profit. On the contrary: “Your own signature is vital, in fact it is becoming more and more important,” believes Christoph Huber, Festival Director of the OpenAir St. Gallen. Dany Hassenstein, member of the Executive Committee of the Paléo Festival Nyon backs up this view in the NZZ newspaper (12.6.2015): “The reality is, the whole package is key.” It’s about “bringing magic to the festival.”

Boutique festivals are shaking things up.

Whilst the traditional open air festivals and time-honoured indie festivals are increasingly incorporated within international, multi-festival structures, boutique festivals are having their moment: small, sometimes intimate live events that are shaking up the scene with ideas and a love of experimentation. The boutique trend originated in the USA and has now been warmly embraced in Europe. Boutique festivals are redefining the festival format: as a 360° experience and a synthesis of the arts. Burning Mountain at Charal (Zernez) in Graubünden is among the pioneers in Switzerland.

Europe’s highest altitude live festival employs around ten visual merchandising teams and devotes a great of energy to the design of the floors and the festival areas. Performance artists, workshops and the Food & Craft market are as much a part of the overall experience as the sound.

Crossover between music and lifestyle.

The boutique festivals derive their innovative impetus from all kinds of lifestyle milieus and communities: whilst the indie pop festivals celebrate rural life and proximity to nature, the electro scene scores with its unique locations. Festivals like Outlook (Fort Punta Christa, Pula, Croatia), Electrisize (Erkelenz, Germany) or A Summer’s Tale (Luhmühlen, Germany) are the European standard-setters.

A Summer’s Tale, for example, offers a motley crossover: “live music, art, lectures, film, nature & enjoyment” are on the programme, along with organic wine tasting. A real jewel among boutique festivals is Château Jolifanto, the predominantly private electro festival for around 600 guests that is held in a 55-room château in Burgundy.

The big Swiss festivals are also muscling in on the boutique trend: the world music-themed Village du Monde on the Paléo site and the creative partnership with art schools give the Western Swiss mega-event a nice, non-profit feel. 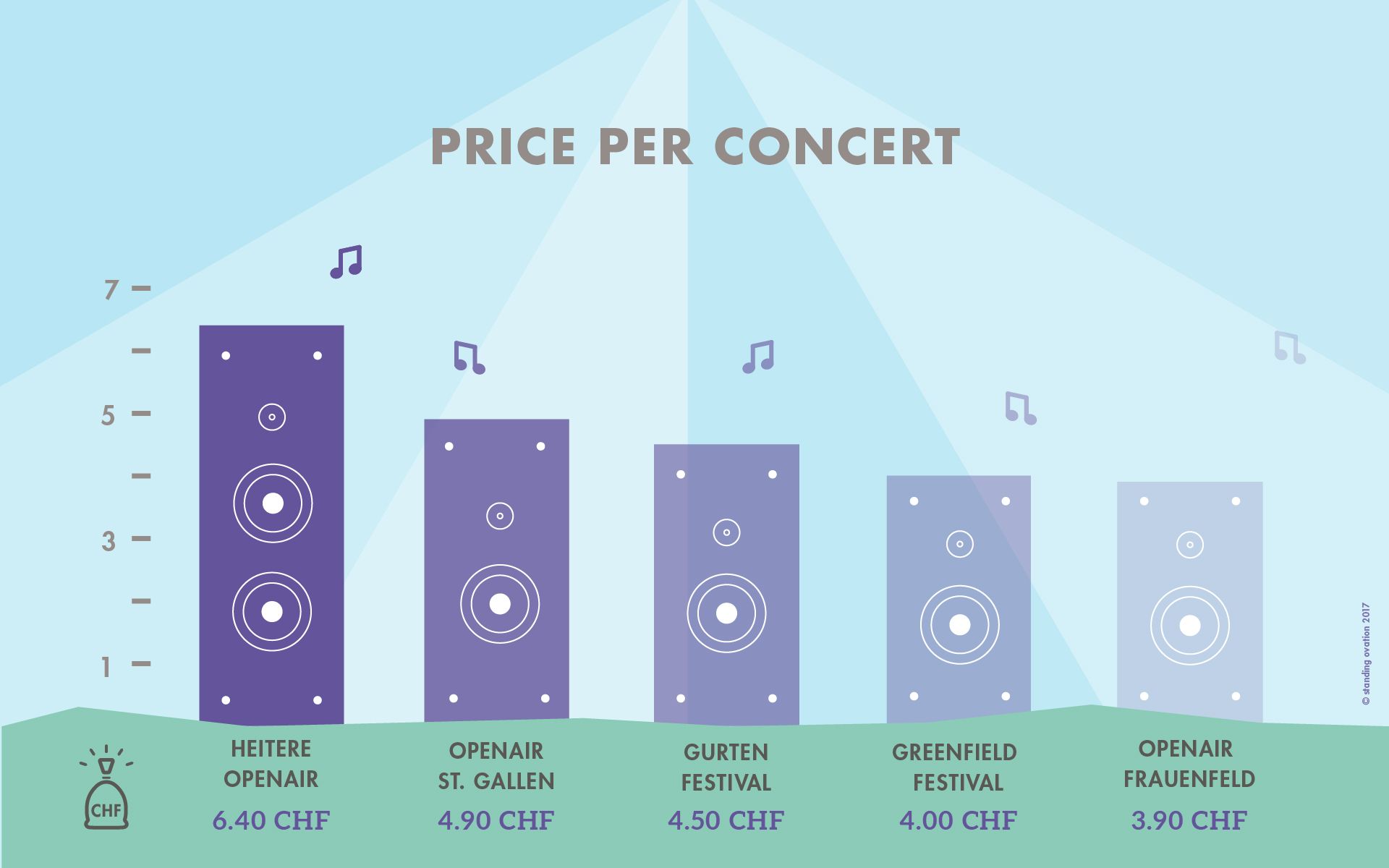 In today’s festival scene, to achieve commercial success, newcomers must redefine the live experience. Take the example of the recently established Rüttelhütte in Air Festival. This event, in Hauptwil, canton of Thurgau, is billed as “Switzerland’s coolest house party”. Its bombastic positioning has proved popular, as has the concept of combining music with “premium entertainment”.

The Rüttelhütte in Air Festival not only offers “the world’s first indoor camping area” and the “first Swiss black light mini golf course” but also the “Masters of Beer Pong” (hence the minimum admission age of 18). Backed by an association, the Rüttelhütte in Air Festival was first held in 2015, thanks to crowdfunding raised via the Raiffeisen “Local Heroes” platform. The hyped-up action style of this new breed of festival is hard to top! With its top-class line-up of Swiss acts, the festival has also caught the attention of the Migros Culture Percentage, Migros’ main vehicle for exercising its cultural and social commitments.

New cooperation between festivals and sponsors.

Switzerland’s first generation of festival-goers is now retired. The festival as a stage event complete with muddy campsite and queues for the toilets has also had its day. More and more themed areas are sprouting up on festival sites, aimed specifically at individual communities and needs. The more festivals become live experiences, the more diverse the opportunities for live marketing.

Gone are the days of aggressive sponsorship branding and large-scale advertising.

“For many sponsors, festivals are the perfect way to engage with younger consumers in a laid-back way”, says Christof Huber, of Incognito Productions, the organiser of festivals such as OpenAir St. Gallen, Stars in Town (Schaffhausen) and Summer Days (Arbon). Gone are the days of aggressive sponsorship branding and large-scale advertising. “A subtle and practical presence is more effective. Because of this, the advertising is usually developed in consultation with the festival organiser. The result is that it integrates casually into the festival concept.”

The next festival season is already in the planning stages, and the first line-ups will soon be announced. One thing is clear: live festivals are part and parcel of summer and the open air feeling is now very much a lifestyle choice.

Winston and standing ovation on tour.

With “Winston Village”, standing ovation has developed an open air concept for JTI that seamlessly combines the festival experience and brand experience. At the heart of the concept:

• Innovative branding was the watchword: the Winston Tower was integrated into the festival architecture.
• Multiple touchpoints led from getting to know the band to being part of it.
• A unique ambience was created in the Village, with lounges, DJs and activities.
• The Village concept had to work in a wide variety of festival settings.