Organising an event of the magnitude of the Zurich fan zone is a singular task. It requires meticulous project planning and rigorous quality management. The astonishing result was there for the whole world to see.

The European Football Championship is the third largest sporting event in the world. On winning the UEFA mandate to stage the tournament, the host cities set about the huge job of planning the UEFA fan zones. The city of Zurich commissioned standing ovation to build and manage the fan zone at Bellevue Square. Besides the size and duration of the event (7 to 29 June 2008), there were numerous other obstacles to overcome. Setting up a fan zone at Zurich’s busy traffic junction was itself a highly complex logistical task.

Stand capacity utilisation was at 96%, with spectator numbers totalling 750,000 over the entire event. A great success!

During the three-week championship, some 725,000 spectators visited the fan zone. Capacity utilisation over the entire duration of the event was at 96% in the stand and 90% on the lake platform. The matches were shown on three giant 60 m2 screens, with one positioned on Sechseläuten Square, another on Lake Zurich and the third in a mobile truck on the Utoquai. As well as ensuring maximum visibility, this also optimised the distribution of spectators across the site. The entrance gate was formed by two gigantic arches at Bellevue and the lake promenade. 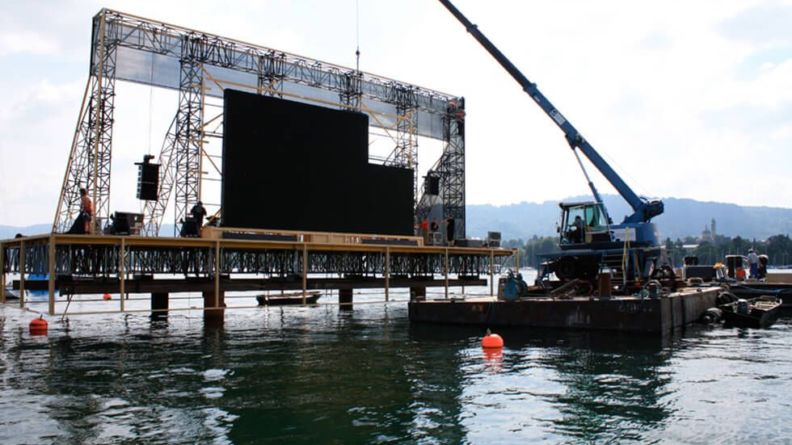 The 2008 European Football Championship was a tremendous success for the city of Zurich. Efficient management of the UEFA fan zone at Bellevue played a great part, especially given the international media presence that it attracted. A picture of Zurich as a modern, open football city went around the globe.